A Brief History of Trenches

You are here: Home / A Brief History of Trenches

A Brief History of Trenches 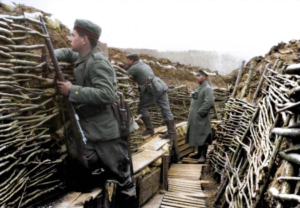 Many people, especially of certain generations, think of trenches in the context of warfare, such as World War I (1914-1918), where thousands of miles of trenches were dug throughout Europe, orchestrated by military engineers. The fact is, trenches have been utilized well before WWI and in a capacity other than warfare; for the construction and development of modern infrastructure. It was in the late 1800s, not long after the American Civil War (1861-1865) and into the early 1900s, that the need for construction trenches rapidly grew and the appearance of the newly-coined term ‘civil engineer’ began being used to discern between those who specialized in non-military projects like bridges, buildings, utilities and other public works. Before this time, it was not uncommon for military engineers to work as civil engineers in times of peace.

Warfare trenches date back as far as the 17th century, when they were created by a French military engineer for the purpose of attacking and overthrowing fortresses in Europe. Some scholars believe they may well have been used before that, during the tumultuous medieval times, known as the Dark Ages, after the fall of the Roman Empire.

Initially, these early military trenches were effective against swords, arrows, spears and hand-launched cannons. Although hand launched cannons could be successful at stopping the siege in the trenches, they were unreliable at hitting the targets. However, military trench strategy was forced to change with the advent of using ‘black powder’ or gunpowder, in more deleterious fashions. This improved use of gunpowder yielded trenches to become vulnerably exposed to muskets, small fire arms and more accurately launched cannon fire. This technological advancement brought both sides out to build their own trenches, engaging them in full trench warfare. Eventually, trench warfare was and is no longer practical due to airpower, tanks and other innovative tactics. 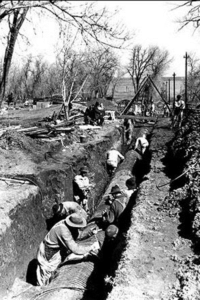 Much was learned by and from the first trench military engineers regarding soil, watersheds, shoring and excavation. Trenches and trench safety have come a long way since used in warfare. Although construction trenching doesn’t need to consider cannon fire or tank attacks, there are many complicated components to safely shoring a trench. Thanks to the civil engineers that have helped create and guide the regulatory tabulated data which ensures the competency and integrity of all components of trenching, from manufacturing accreditation for companies like ours, to soil analysis. Ultimately, the goal being to keep the trench workers safe under any circumstance or condition.

At Pacific Shoring Products, LLC, we are always proud to work alongside all of the industry leaders and provide our longstanding expertise and input at all times. Collectively, we are protecting the individuals in our modern day trenches and the trenches of the future.